Mercy Sunday 2015 (12 April) will go into history as a little noticed but all-important day in the life of the Catholic Church, when Pope Francis showed courageous leadership by speaking in no uncertain terms about the genocides and mass killings of the 20th and 21st centuries, starting with the Armenian Genocide of 1915, then the genocides planned and executed by Nazism and Stalinism and drawing a line all the way to the mass slaughter of ethnic groups and Christians for their faith today, especially in the Middle East and Africa:

On a number of occasions I have spoken of our time as a time of war, a third world war which is being fought piecemeal, one in which we daily witness savage crimes, brutal massacres and senseless destruction.  Sadly, today too we hear the muffled and forgotten cry of so many of our defenseless brothers and sisters who, on account of their faith in Christ or their ethnic origin, are publicly and ruthlessly put to death – decapitated, crucified, burned alive – or forced to leave their homeland.

Today too we are experiencing a sort of genocide created by general and collective indifference, by the complicit silence of Cain, who cries out: “What does it matter to me? Am I my brother’s keeper?” (cf. Gen  4:9; Homily in Redipuglia, 13 September 2014).

The Holy Father, whom we have all come to know as the Pope of Mercy, and whose words are often misunderstood or misused by those failing to see the unique charisma and calling of Pope Francis, has done something very important: he has spoken the uncensored truth about facts of history that certain governments and political leaders are trying to cover up and silence. Whether it is the Armenian Genocide of 1915, the extermination campaigns by Lenin. Stalin and Mao, or the systematic uprooting, torture and killing of Christians and other groups in the Middle East, Asia and Africa today, leaders East and West are all too often engaged in campaigns of organised forgetting. Where this organised forgetting leads to, Pope Francis tells us as well:

(..) for whenever memory fades, it means that evil allows wounds to fester. Concealing or denying evil is like allowing a wound to keep bleeding without bandaging it!

We need the living memory of history, not as a political tool to condemn others, but as a constant reminder of our ever recurring human frailty and tendency to do evil, even very great evil. Real mercy, therefore, is not – as many today would like to suggest the Catholic Church to do – to look away when sin or evil occurs, but to have the courage to be merciful in truth and justice. As the Catholic author Michael O’Brien puts it so well “Without justice, human mercy all too easily dissolves into sentimentalism and false compassion, leading to an increase of sin and error.” We have seen this mechanism occur in the history of humankind again and again. The Holy Father refers to this tragic cycle of sin and error leading to senseless slaughter:

It seems that the human family has refused to learn from its mistakes caused by the law of terror, so that today too there are those who attempt to eliminate others with the help of a few and with the complicit silence of others who simply stand by. We have not yet learned that “war is madness”, “senseless slaughter” (cf. Homily in Redipuglia, 13 September 2014).

And let there be no mistake: this continued senseless slaughter is not only caused by war in the classical sense, by means of guns and knives in the hands of brutal terrorists and armies, it also takes place globally almost unheard and unseen in clinics at the hands of men and women who are convinced that the unborn child in the womb of the mother has no independent right to live. Also here there is a complicit and an even highly organized silence and covering up in the face of a brutal practice that kills more human beings every year than all the other mass killings of the 20th and 21st centuries combined (over 40 million by official UN estimates). Whilst we cannot and should not make a comparison between the people and the motives behind these forms of killing, the undeniable fact remains that no other slaughter of innocent human life is so vast and so systematically – even industrially – organised as abortion is today. Whilst we rightly condemn the genocides of the 20th and 21st centuries, let us not forget and remain silent about the mass killing of unborn life that takes place in our cities every day. It is still, as Blessed Mother Theresa of Calcutta rightly said, the biggest threat to world peace.

The great tragedy of history is that the killing of certain groups of people by other groups of people always seems perfectly justified for the perpetrators – they always think and openly proclaim that they are doing a service to society. Sadly, no mass killing in the history of mankind – whether it be the many genocides or even abortion – escapes this deadly error of judgment. It is here that the words of Pope Francis on Mercy Sunday 2015 turn out to be so vital, because he reminds the world of the foolishness of forgetting. He warns in clear wording, rarely heard from world leaders, that this attitude leads to ever more horror and death:

It is the responsibility not only of the Armenian people and the universal Church to recall all that has taken place, but of the entire human family, so that the warnings from this tragedy will protect us from falling into a similar horror, which offends against God and human dignity. Today too, in fact, these conflicts at times degenerate into unjustifiable violence, stirred up by exploiting ethnic and religious differences. All who are Heads of State and of International Organizations are called to oppose such crimes with a firm sense of duty, without ceding to ambiguity or compromise.

It is then, our duty as Christians to speak about and speak out against all these horrors of yesterday and today and not let political or economic expediency blind us for the truth. If we Christians in the West – whether in academia, politics or elsewhere – would start speaking with the same courage and respectfulness as Pope Francis does, it would very likely lead to less of these horrors for our children. 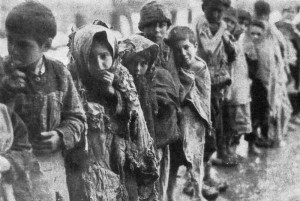