Tonight we will pile into a bus and head for Italy, that wonderful land of many saints.  We are on our way to visit St. Pio of Pietrelcina and St. Nicholas!  We are going to give thanks specifically for a large donation we received over the summer, but in general for all the many blessings God has given the ITI.  Dear alumni, benefactors and friends of the ITI, we will take you and your intentions with us in prayer.  Photos and more when we return!

The beginning of the year brought to the ITI a number of students who have considerable musical abilities and talents, not least a number of pianists. Good use has been made of the upright in Moses Hall (a classroom) up to now in between classes and late into the evenings. But great pianistic talent must be matched by suitably grand instruments and unfortunately, despite the fervent prayers of many, until today the state of our pianos has remained unchanged.

The inventory of ITI pianos runs as follows; in our possession we have a small upright which spends its life in Moses Hall, and a boudoir grand built c.1880 currently living in somewhat forlorn conditions in the Russian Cinema.

The potential of both pianos is great, but the actuality is hampered in the upright by its tuning; in the grand, lamentations could be sung of the trials which the grand has been subjected to leaving it in its current derelict state.

Hope is stirring among pianists and music lovers alike though, and through the initiative of some of the pianists, work began on the grand piano a week ago. 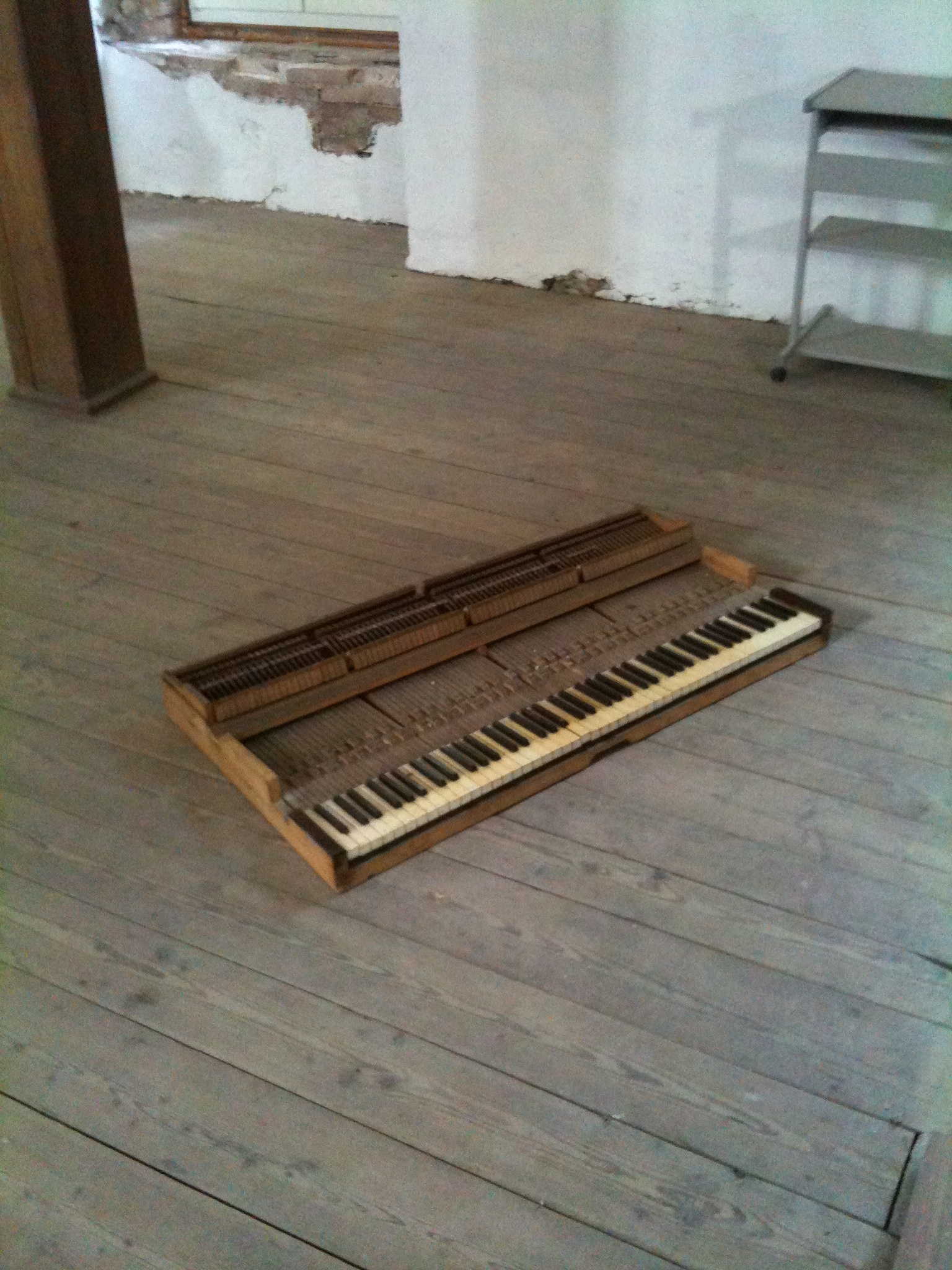 Some intrepid dismantling led to the cleaning and dusting of the action of the grand piano. It appeared as though there was no life in it prior to cleaning, but the removal of decades of dust, grime and filth works wonders for tired old pianos. Interestingly, this grand piano has a Viennese action which was designed by Johann Andreas Stein in the 18th century. This type of action, in which the hammer faces the pianist, is very well suited to composers such as Bach, Haydn, Beethoven and composers from the same period. The more modern English action developed through the work of Americus Backers and later piano makers evolved it into its common form today with the invention of the repetition lever in the 19th century. The repetition lever allows for rapid successive striking of a key, something difficult to achieve with theVienna action, hence the suitability of different actions to different composers. Suffice it to say that the ITI has a grand piano steeped in history which could sound wonderful with some dedicated restoration.

At this very minute tuning is underway on the upright in Moses Hall and discussions are underway as to the restoration of the grand.

It is hoped that the grand piano will prove to be a centrepiece in the Russian Cinema and that fortnightly or monthly recitals will begin once the piano and room are in a suitable condition. In the meantime, while work progresses, the students will be grateful and pleased that the one playable piano has been tuned and the corridors will be brought to life with the sound of Chopin, Liszt, Bach and many other of the great composers of the classical tradition.

Anastasia Northrop, founder of TOBIA and current ITI student was just interviewed on Zenit about her work with Catholic singles.  The article is aptly named, No Reason to Fear the “S” Word (Single). As the number of singles is rising in the Church (nearly 40% of the Catholic population in the US), ways need to be found to help Catholic singles (not just ‘young adults’) find their place in parish life.  The bottom line?  Simple.  Priests, find ways to include singles in parish life.  Singles…find ways to use your talents for the benefits of your parish.  I’d be interested to know what has been found to work in different parishes.

A group of ITI faculty and students jumped into cars to speed down to Norcia for a quick weekend to witness the ordination and first Mass of our beloved Don Basilio.  He was ordained by His Excellency Renato Boccardo, on Saturday, September 24, 2011.  After he graduated from the ITI, we all eagerly awaited news of his ordination date.  Br. Basil is now Fr. Basil and the weekend was a treat not many of us will forget.  As the birthplace of Sts. Benedict and Scholastica, Norcia is a pilgrimage place – also know for its great prosciutto!  We prayed and feasted and then jumped back into our cars to arrive home just in time for classes.  Fr. Basil, you will be in our prayers as you carry out your ministry!