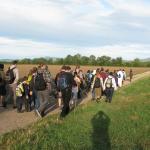 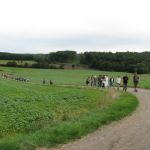 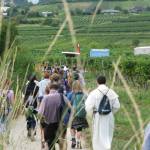 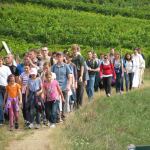 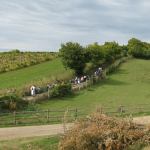 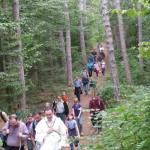 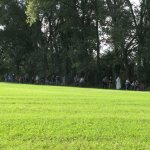 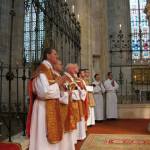 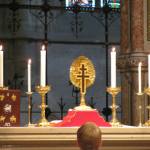 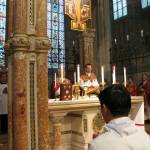 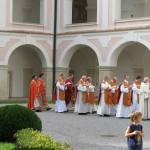 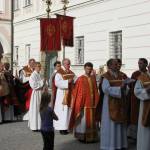 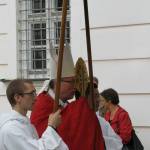 In Latin, the verb vocare means “to call”, and the prefix con- meaning “with” or “together”; hence, convocation literally means a “calling together”, an appropriate title for the opening festivities of the new year here at the ITI.

This year marks the first time that the ITI has had new students inscribe their names in a matriculation book during the formal convocation ceremony to open the beginning of the academic year. The day began with the Divine Liturgy of St. John Chrysostom, presided over by His Excellency, Bishop Peter Stasiuk C.SS.R. of the Ukrainian Greek Catholic Eparchy of Saints Peter and Paul in Melbourne (Australia).

The clergy, faculty, staff, students, and families then processed from the parish church to the Schloss while chanting the Litany of Saints along the way. The convocation ceremony itself began with remarks from the Rector, Monsignor Hogan.

Monsignor Hogan spoke of the current events in Syria, the state of secularism in much of the West, and the crisis of faith among Catholics. He spoke of the dictatorship of relativism in society that pushes for, not a cause of atheism, but a truly anti-theistic, and in particular, an anti-Christian public agenda. For these reasons, he said, the need is ever more pressing for laity and clergy alike to spend time in an intellectual and spiritual formation in order to be able to go and be salt and light to a world which has rejected the Gospel.

Monsignor Hogan’s message to the students was essentially this: To be a martyr is to be a witness– while some martyrs die for the faith, most offer their own sacrifices for the sake of Christ in little ways, and witness to Christ daily through their words and deeds as mothers, fathers, priests or religious. The calling together of the faculty and students for the beginning of the academic year is, in a focused way, a calling of preparation to be a martyr.

After the Rector’s opening remarks, the Faculty said the Profession of Faith pledging their fidelity to Holy Mother the Church.  Finally, all of the new students were called forward to inscribe their names in the matriculation book, signifying the duties and obligations they are committing to as students at the ITI.

The ITI community then had a time of fellowship over a lunch of Wiener Schnitzel and wine at the local Heuriger Scheibenreif.

That afternoon, Dr. Vincent DeMeo gave his reflections on the academic life of the ITI.  He explained the notion of the common good, spoke of our motto “Sicut cervus ad fontes”, and stressed the importance of carefully reading each text and asking questions along the way.  He finished with a reminder to live a life of charity together.  All points to be practiced in a well-lived life of study, prayer, and community for the student of the ITI.

The evening concluded with a BBQ on campus that included beer that was brewed by a few of the students.