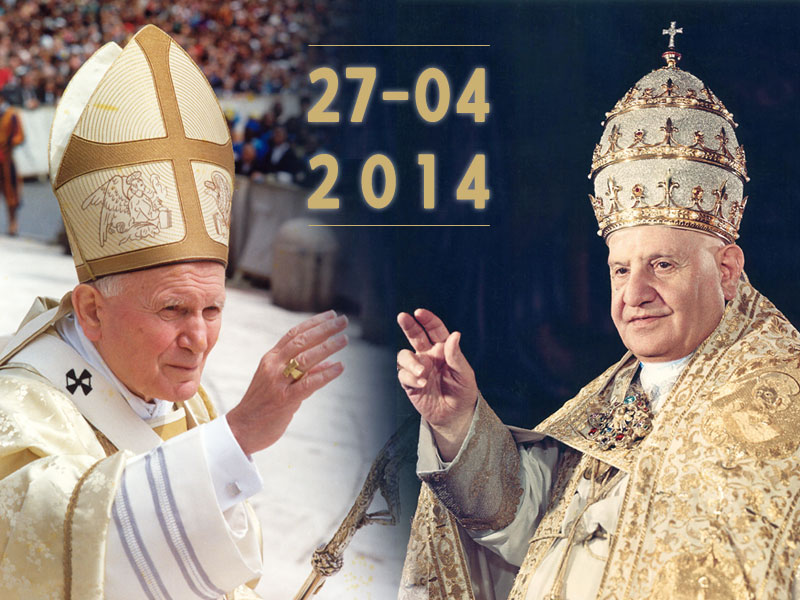 I am recently arrived back from the canonization of Pope Saint John Paul II and Pope Saint John XXIII in Rome. I have not had hardly enough time to reflect on what it means that they are canonized, or what a gift it was to be there to witness it, but at very least  I am able to articulate a bit of what the experience was like. And so I think I must tell you my three favorite memories.

A number of my fellow ITI students elected to forgo sleep entirely on the eve of the 27th and kept vigil all night in prayer in order to secure a spot in the square of St. Peters. My small group arrived the morning of, and pressed onwards and inwards until we were about two kilometers from St. Peter’s, with a straight-shot view, nonetheless, of the great dome and the vast sea of pilgrims that stood ahead of us. Even from such a distance the whole celebration felt very intimate to me, due in part to the projector screens and loud speakers; and, even more particularly, thanks to the prayerful witness of the thousands who spanned the space between me and the altar, joining me to it.

This is the first thing that I must recount: the music was epic. Epic like an ancient ballad, epic like the last great blast of a symphony, epic like a marble monument: intentional, timeless, mighty, reverent. The congregation and the choir sang the lines of the creed back and forth in a kind of dialogue, and upon reaching the lines “on the third day He rose again, in accordance with the Scriptures,” these lines were repeated, and the choral melody ripped open into a surging harmony. Those five melodic seconds are my most vivid memory of the whole Mass. It struck me afresh, suddenly and keenly, as the music cued, that we were professing a thing wildly beautiful, beyond anything man has ever dared to hope.

But music must ever give way to silence. After Holy Communion had been distributed, a voice came over the loud speakers in several different languages, calling out to this congregation of millions for a few moments of silence. I hardly expected it could be possible, but the throngs obeyed. How can I explain to you what it is like to pray in silence together with so, so many people? There were square kilometers of people stretching ahead of me, packed in like sardines, and countless more fanning out behind, waiting in silence for the Pope to say “let us pray.” I knew then, with a searing certainty, that I am part of something infinitely bigger than myself, and more beautiful than words.

Yet the dearest memory I have of this Mass came between the music and the silence: the umbrellas. Yes, yes, the umbrellas; I mean that with all my heart.

Yes, we do. With reverence and dignity, with matching umbrellas, probably set aside in a preparatory way, beforehand, in case of rain: because we love Him so much. We love Him so much that we come to receive Him in the rain, anyway, and we are eager to see that He is kept dry, like any King. We are so little in response to His complete self-gift that the best we can do are umbrellas; and yet, it is exactly right.

Altogether, this scene summed the whole thing up for me. We were gathered to proclaim and celebrate the entrance of two new saints in to heaven. And what made this all possible was confessed in that harmonic line of the creed, and adored in the silence, and received under papal umbrellas. And I shall ever relish these memories.